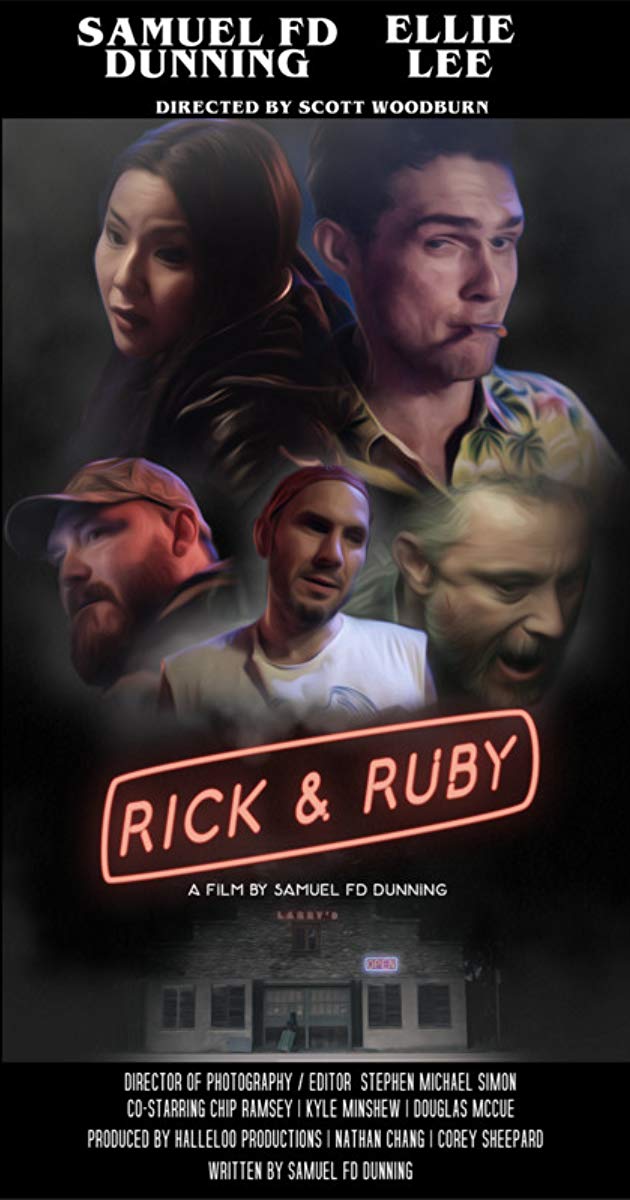 This week we're highlighting a film from the upcoming VIDI SPACE Film Festival (VSFF). Rick and Ruby is a short horror comedy from creator, Samuel Dunning. The gory short film revolves around Ruby and her (thirsty) partner, Rick. I had the chance to interview Samuel about his cinematic influences, favorite movies, and getting laughs while covered in fake blood. - AR, Editor

Every week leading up to the VIDI SPACE Film Festival we will be highlighting a new filmmaker that has submitted their content for the 2020 event. 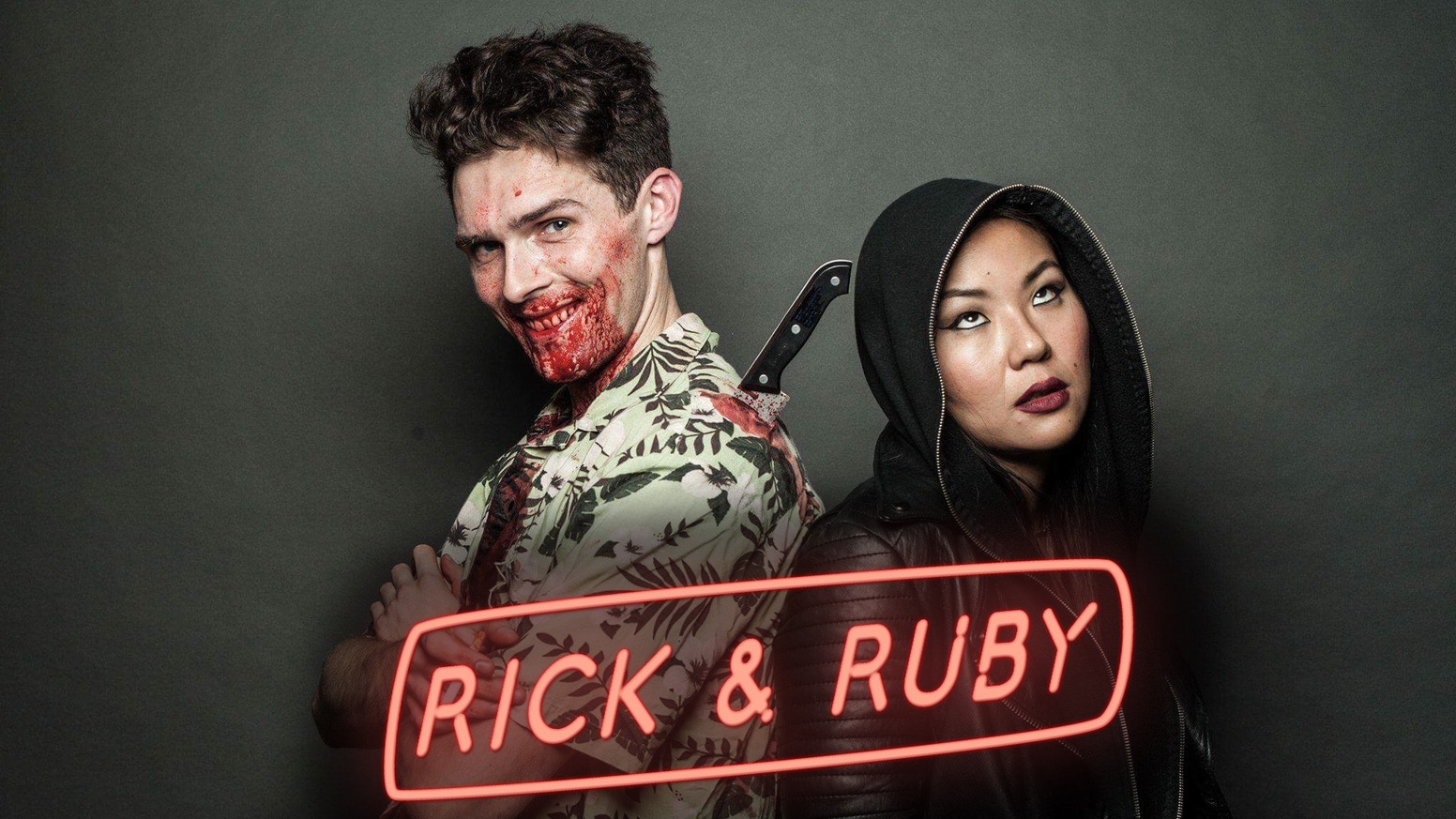 ”What really was important to me out of the gate was their interplay with one another and their perspectives as characters. With shorts like this that is the most important piece of the puzzle as you are working with a limited time-frame and so you have to come out swinging. - Samuel Dunning

Rick and Ruby had me locked in when I realized it revolved around a vampire being transported in a piece of luggage. Without giving too much away, can you give us a quick synopsis of the film?

Rick and Ruby is a short horror comedy about a girl and her vampire sidekick traveling the backroads of America. After stopping at a rural roadhouse for a drink and directions, Ruby is accosted by three not-so-good-ole-boys attempting to have their “dueling banjos” way with her. In the nick of time, Rick pops out of his travel trunk and the two of them dole out their own form of gruesome frontier justice.

I feel like Rick and Ruby leaves a lot of questions, mainly revolving around the backstory of the characters, but that’s one of the things that make the movie so enjoyable. It leaves it up to the viewer to come up with their own story as to how Rick and Ruby end up where they are when the movie begins. I would assume it’s difficult to choose what parts/pieces of the story to tell and what to leave up to the imagination. Can you tell me about that decision making process? How do you determine what’s most important with a movie like this?

Well interestingly enough, the idea for Rick and Ruby was not culled from a larger script or treatment, as is the case with many short films. I basically had a mental image of Rick in mind and was trying to figure out who this bloody, Hawaiian-shirt clad guy was. Ultimately it came to me as a set-up for what amounts to an extended scene. It was only after showing it to friends and peers that I began to think of it as a larger story where I would flesh out the backgrounds of these two and how they got on this road trip. What really was important to me out of the gate was their interplay with one another and their perspectives as characters. With shorts like this that is the most important piece of the puzzle as you are working with a limited time-frame and so you have to come out swinging. I guess what I’m saying is that my decisions were all based around what best framed the characters of Rick and Ruby and added or alluded to their personal stories and motivations.

I don’t feel like I’m giving away too much here in saying that there’s blood. I mean, it’s a vampire movie. It’s only right. That being said, when you take your filmmaker hat off and go to the movies, what do you enjoy? An old fashioned bloody horror movie or something else? What movies/filmmakers/genres inspired Rick and Ruby and you in general?

Oh that’s not giving it away at all! Just watching our teaser trailer is enough to scare some people off. I really appreciate all genres and films for what they are and seldom rule anything out if it looks like it is worth my time and attention. I probably gravitate more towards indie stuff and thriller/horror piece more of late due to all my time and energy being wrapped up in this film. That said my favorite films are The Beatles’ films “A Hard Days Night” and “Help” and the original “The Producers” with Zero Mostel and Gene Wilder, so I’m all over the map. I’d say “Rick and Ruby’s” influences largely draw from films/shows like Tarantino’s “Death Proof”, Rodriguez’s “Dusk Till Dawn”, and AMC’s “Preacher”. I really wanted the film to have a lo-fi, Grindhouse-y feel to it. Like a guilty pleasure of revenge fantasy with no overarching message or meaning- just dirty and grimy and fun.

Tagging along with the question above; The “Rick” character is quite funny and your portrayal really sells the character. Lots of sarcasm and personality. What/who inspired your take on that character and the role of Rick?

Thank you! Rick was a culmination of a lot of things, but largely was built out of the desire to make a role for myself that was fun and would allow me to showcase a wide range of my own acting talents I had yet to have on film. I think it’s fair to say there is plenty of Deadpool, Cassidy, and Stuntman Mike in the cocktail that is Rick, along with whatever other subconscious media anti-heroes I’ve wanted to play over the years.

I feel like the movie lends itself to some pretty hilarious “behind the scenes” moments. Any of those you can share

The one that always comes to mind first is when I filmed that particularly gory sequence where I am lapping up a LOT of spurting blood. I’ll leave out the particulars to avoid spoiling anything. We shot that take over and over and over again and covered myself and the room with tons of fake blood. After we finally cut everyone burst out laughing from how ridiculous the whole moment was and over the sheer quantity of blood I had sprayed all over the room and myself and others (most everyone was wearing plastic raincoats). But then our sound mixer reminded us that I had to repeat the whole sequence again in order to get the best quality sound for the post mix. So I sat in the middle of the room with a glass of fake blood and proceeded to gargle and spew it all over the place while the entire cast and crew stood around and watched silently for the better part of five minutes. By the time she said she had enough recorded we all broke down laughing again.

Rick and Ruby is one of those movies that leaves a lot of questions, but does so on purpose. Any plans to answer those questions in a future installment? I know I’d watch!

Absolutely! I am currently writing a feature treatment of Rick and Ruby and have also written a pilot episode for a potential series. I have a couple possible leads on both and it will ultimately come down to who is interested in which format first to see what I pursue. Either way I have a good feeling you’ll have more of their story to chew over soon enough.

Editors Note: You can see Rick and Ruby, plus all of the other amazing film selections, at the 1st VIDI SPACE Film Festival on February 20th in Reston, VA. More information can be found at https://filmfreeway.com/VIDISPACE